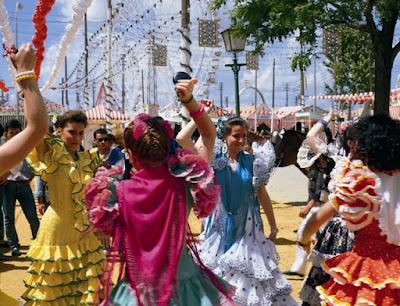 Every year each city in Spain holds a fair or "feria", as known in their local tongue, which is usually a week long celebration that takes place in city squares or fairgrounds and is a big part of the social and religious calendar. Many of them are specific to different towns and regions and offer a huge variety in local specialities, trades, and cultural quirks. Ferias in Spain are usually the local saint's day of a city, however there are other types of fairs that dedicate the celebration to a harvest, the deliverance from the Moors, or simply a safe return from a trip out to sea. Nearly any excuse will do to break out in song, dance and festivity.

Spanish fiestas symbolise the very essence of Spain and the Spanish people. They're colourful, vibrant, usually extremely noisy, often chaotic and always great fun. Ferias usually include a parade, outdoor parties with food, drink and dancing, music concerts, rides for older and younger children, fireworks and dance performances. The ferias in Spain are always attended by locals and entertainers who are impeccably dressed in traditional Spanish costumes.

The biggest festivals of international fame are:

1. The bigger towns and cities often organise a series of bullfights in the local 'plaza de toros' at fiesta time while smaller villages without a bull ring opt for bull running in the streets. One of Spain's most famous (and most dangerous) fiestas is the San Fermin festival in Pamplona which brings thousands of daredevils from all over the world to run with the bulls through the cobbled streets of the old town. 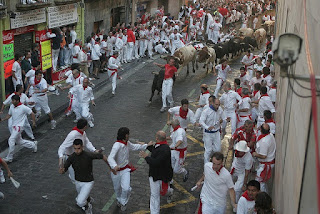 2. Fire, fireworks and fire crackers feature strongly in many festivals and there's no hotter fiesta than the famous Fallas fiesta in Valencia. This is one of the biggest and most spectacular street festivals in Europe – one of those extraordinary and unique events that everyone should experience at least once in a lifetime. Fallas means 'fires' in the local Valencian language and on the night of March 19th each year the whole city appears to be ablaze when more than 350 beautifully made statues are burnt to the ground. 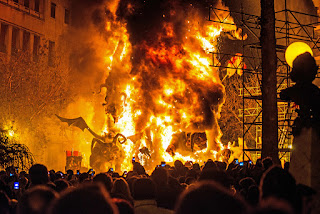 3. Other famous fiestas include the mad, messy Tomatina which takes place in the village of Buñol, about 30 miles east of Valencia. It's the world's biggest tomato fight involving tens of thousands of people being pelted with several truck loads of tomatoes. 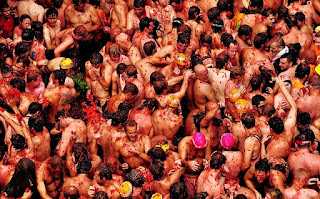 4. And if you think that's a bit weird, wait till you hear about the 'Burial of the Sardine' held in Madrid and various other locations each year. It takes place on Ash Wednesday, at the beginning of Lent, and involves revellers in fancy dress costumes attending the funeral of a sardine! The sardine in question may be a real one in a coffin though sometimes a plastic or cardboard effigy is used. 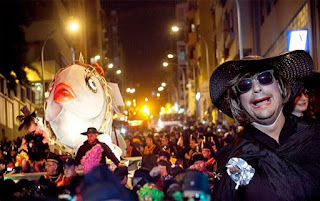 5. One of Spain's most impressive fiestas is the April fair of Seville (Feria de Abril) when the achingly romantic capital of Andalucia is transformed into a fairytale world of tented pavilions, costumed equestrian riders and flamboyant flamenco dancing. 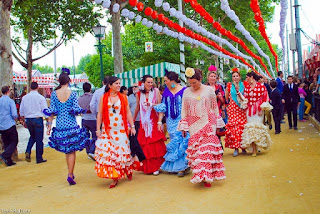 6. Semana Santa is one of the most important festivals on the Spanish calendar. Semana Santa is the Spanish name for Easter. I’ts mainly a series of processions of elaborate floats bearing jewelled statues of Mary and Jesus, penitents wearing pointed hoods, and brass bands. The biggest Semana Santa spectacle is hold in Seville. 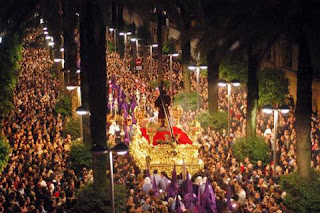 7. La Fiesta de Moros y Cristianos is a celebration of the victory over the Moors in the 13th century. The festival itself dates back to the 16th century, and includes street parades of costumed soldiers and battle re-enactments. It is held in many cities at various times of the year, with some of the largest street parades taking place in Alicante, Alcoy, and Villajoyosa. 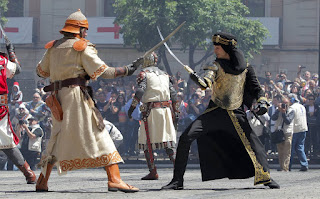 It’s hard to beat the experience of arriving in some small Spanish village, expecting no more than a bed for the night, to discover the streets decked out with flags and streamers, a band playing in the plaza and the entire population out celebrating the local fiesta. Everywhere in Spain, from the tiniest hamlet to the great cities, devotes at least a couple of days a year to their festivals.