Easter in Malaga is one of the most important and busiest times of the year in the city. Also known as Holy Week (Semana Santa in Spanish), Easter in Malaga is characterised by long, solemn processions that parade through the city for 7 days. There is an official procession route in Málaga City where you can watch all the different brotherhoods when they come out, without missing a single detail. Accompanied by bands of bugles and drums, they carry their floats and images, with a high historical and artistic value.

This year Semana Santa takes place from 14th till 21st of April.

All the processions (about 40 of them) start and finish in their own churches or chapels, but they all share a common route along the Alameda Principal, Calle Larios and the start of Calle Granada. Many also go past the Cathedral. 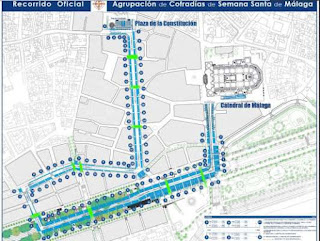 Everyone has their own favourite procession and they’re all spectacular and moving in their own way. Highlights in Malaga include:

Sunday 14 April – Palm Sunday – the most cheerful and made up mostly of children carrying palm leaves.

Monday 15 April – Los Gitanos. Gypsies accompany their Christ and virgin figures with song and dance as they make their way round the city centre.

Tuesday 16 April – Las Penas. This virgin’s cloak is made entirely of fresh flowers.

Wednesday 17 April – El Rico. The Christ figure is accompanied by a pardoned prisoner, recently released from prison. La Paloma. White doves fly to and from the virgin while this procession is in the city centre.

Thursday 18 April – Cristo de Mena. Legionnaire troops accompany this Christ figure as they make their way round Malaga. This is one of the most popular processions in Malaga.

La Esperanza. Another hugely popular procession, this one has the heaviest float – the one carrying the virgin weighs 5 tonnes.

Friday 19 April – all processions are solemn and mostly silent. Las Servitas is the last one and the city lights go out as it parades through the streets.

Sunday 21 April – the black and purple gowns are replaced by white and green for the Sunday of Resurrection procession.

You get the best views from the Alameda Principal and the wide street here gives a good perspective.